Control of Mind Versus Destruction of Mind

Crumbs from His Table

D: When I am engaged in enquiry as to the source from which the ‘I’ springs, I arrive at a stage of stillness of mind beyond which I find myself unable to proceed farther. I have no thought of any kind and there is an emptiness, a blankness. A mild light pervades and I feel that it is myself, bodiless. I have neither cognition nor vision of body and form. The experience lasts nearly half an hour and is pleasing. Would I be correct in concluding that all that was necessary to secure eternal happiness (i.e., freedom or salvation or whatever one calls it) was to continue the practice till this experience could be maintained for hours, days and months together?

B: This does not mean salvation; such a condition is termed manolaya or temporary stillness of thought. Manolaya means concentration, temporarily arresting the movement of thoughts; as soon as this concentration ceases, thoughts, old and new, rush in as usual and even though this temporary lulling of mind should last a thousand years it will never lead to total destruction of thought, which is what is called salvation or liberation from birth and death. The practiser must therefore be ever on the alert and enquire within as to who has this experience, who realises its pleasantness. Failing this enquiry he will go into a long trance or deep sleep (Yoga nidra). Due to the absence of a proper guide at this stage of spiritual practice many have been deluded and fallen a prey to a false sense of salvation and only a few have, either by the merit of good acts in their previous births, or by extreme grace, been enabled to reach the goal safely.

A Yogi was doing penance (tapas) for a number of years on the banks of the Ganges. When he had attained a high degree of concentration, he believed that continuance in that stage for prolonged periods constituted salvation and practised it. One day, before going into deep concentration, he felt thirsty and called to his disciple to bring a little drinking water from the Ganges; but before the disciple arrived with the water, he had gone into samadhi and remained in that state for countless years, during which time much water flowed under the bridge. When he woke up from this experience the first thing he asked for was ‘water! water!’; but there was neither his disciple nor the Ganges in sight.

The first thing which he asked for was water because, before going into deep concentration, the topmost layer of thought in his mind was water and by concentration, however deep and prolonged it might have been, he had only been able to temporarily lull his thoughts and when, therefore, he revoked consciousness this topmost thought flew up with all the speed and force of a flood breaking through the dykes. If this is the case with regard to a thought which took shape immediately before he sat for meditation, there is no doubt that thoughts which have taken deeper root earlier will still remain unannihilated; if annihilation of thoughts is salvation can he be said to have attained salvation?

Sadhakas (seekers) rarely understand the difference between this temporary stilling of the mind (manolaya) and permanent destruction of thoughts (manonasa). In manolaya there is temporary subsidence of thought-waves, and, though this temporary period may even last for a thousand years, thoughts, which are thus temporarily stilled, rise up as soon as the manolaya ceases. One must, therefore, watch one’s spiritual progress carefully. One must not allow oneself to be overtaken by such spells of stillness of thought: the moment one experiences this, one must revive consciousness and enquire within as to who it is who experiences this stillness. While not allowing any thoughts to intrude, he must not, at the same time, be overtaken by this deep sleep (Yoga nidra) or Self-hypnotism. Though this is a sign of progress towards the goal, yet it is also the point where the divergence between the road to salvation and Yoga nidra takes place. The easy way, the direct way, the shortest cut to salvation is the Enquiry method. By such enquiry, you will drive the thought force deeper till it reaches its source and merges therein. It is then that you will have the response from within and find that you rest there, destroying all thoughts, once and for all.

This temporary stilling of thought comes automatically in the usual course of one’s practice and it is a clear sign for the final goal of spiritual practice and being thus deceived. It is exactly here that a spiritual guide is necessary and he saves a lot of the spiritual aspirant’s time and energy which would otherwise be fruitlessly wasted.

The writer now realized that it was to get this important lesson at the right point of his progress, that he was taken, even unknown to himself and against his will, to Sri Ramana, through the intervention of his superior. He had come exactly to the position where the road bifurcates, one side leading to destruction of thought (salvation) and the other to Yoga nidra (prolonged deep sleep). A way-shower or a road signpost was necessary at this stage and the way-shower must necessarily be in the shape of a personal Guru, a realized soul, and perhaps by sheer acts of merit in his past birth and no “known special merit” of his own in this birth, he was brought before such a realized soul, in the person of Sri Ramana, to obtain these instructions from him, failing which he would have been probably groping in the same manner as the sage on the banks of the Ganges, in the story narrated above. The following chart will, perhaps, illustrate this:of one’s progress but the danger of it lies in mistaking it 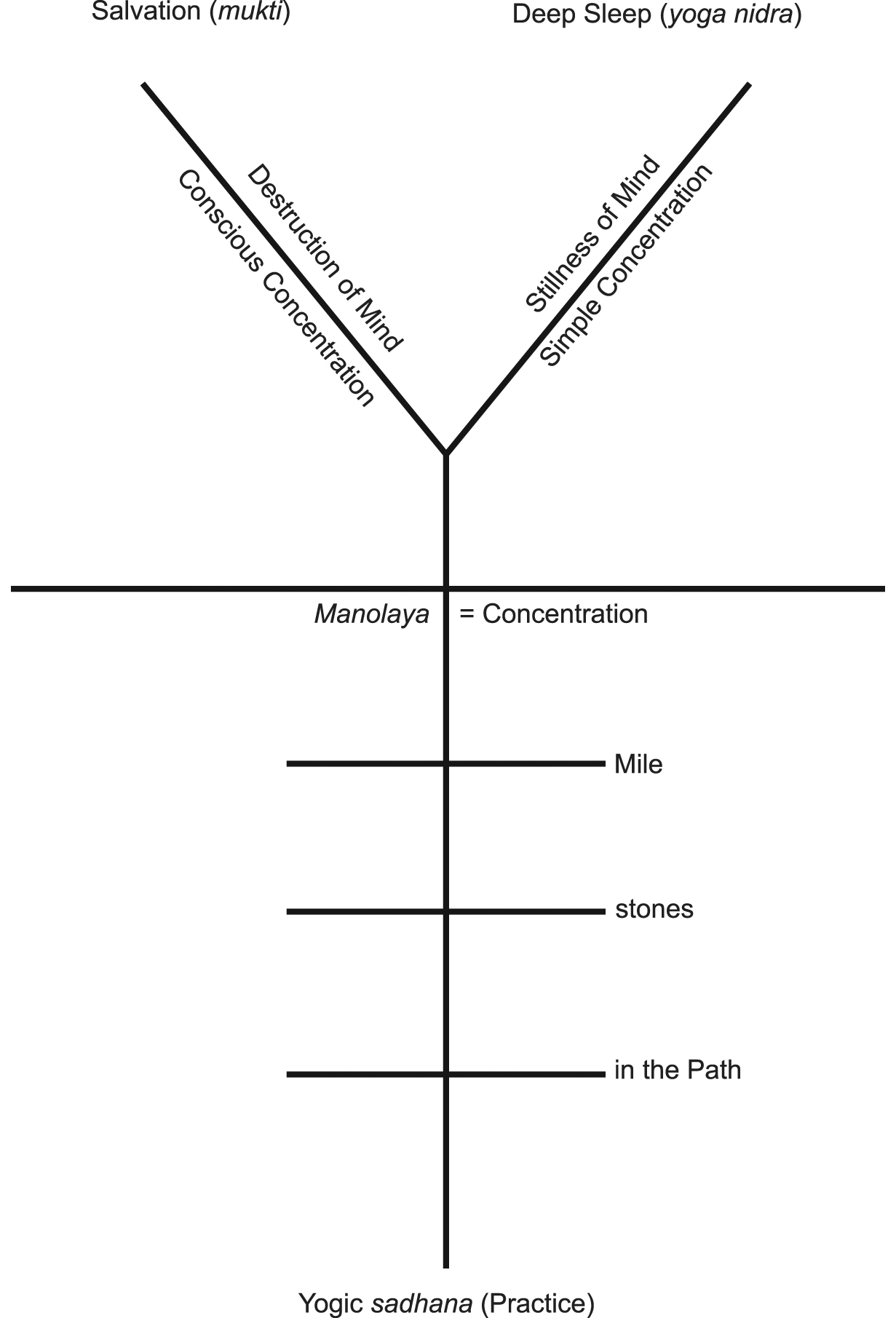